This Tuesday, August 25th, Idea Factory International’s Amnesia: Memories will be kicking off the latest wave of officially translated otome games that we’re able to play in English, and a lot of fans are excited! And they’re excited for good reason, since Amnesia is a game that features a colorful cast that is quite…unforgettable. 😉 When I first heard anything about the game, the first character I was immediately drawn to is Shin. This sneak peek will focus on the beginning of his route, the Heart World. Let’s take a look at what kind of person Shin is, and what challenges the heroine has to overcome. 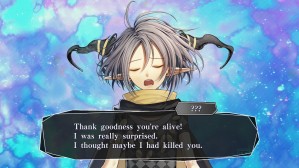 Immediately when the heroine wakes up, she finds herself in a realm not her own. Trying to reason with what’s going on, a mysterious being appears and asks if she’s okay while exclaiming that he’s glad that she’s alive. Just who is this guy and what is going on here?

He introduces himself as Orion, a spirit that accidentally lodged himself into the heroine’s consciousness, causing her to completely lose all of her memories. His existence in her soul pushed her memories out, rendering the heroine unable to even remember her name. Because Orion is in her soul, he is able to experience all of the heroine’s thoughts, and anything that happens to her physically. Orion vows to aid the heroine to get her memories back, but he explains some rules that must be followed: that she cannot reveal that she has amnesia to anyone, and that she cannot go to the hospital. The reason for that is because if she was suspected of amnesia, she would be taken back to the hospital, a place without any interaction or mental stimulation. If that were to happen, she would be unable to regain her memories for all time. In order to get her memories back, she has to talk to people that seem to know her to get back pieces of her memory until she regains them completely. Orion, by the way, is only ever seen by the heroine, so it’s not like she’s able to explain his existence without her seeming like she’s a bit crazy. With these restrictions in mind, they set out into reality to see what kind of place the heroine used to call “home.”

As soon as the heroine wakes up, it’s quite apparent that they’re in a hospital, the #1 place they should avoid being in! Orion panics and tries to think on what to be done when he realizes that the heroine is wrapped in bandages; she seems to be in the hospital for an accident. They quickly discover the nameplate and at least learn of her name, but before anything else can be found out..someone announces their entrance and comes into the room. 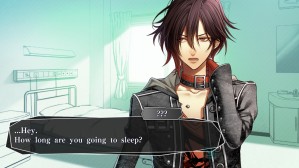 A guy walks in and comments on the heroine’s ability to oversleep, despite her being injured in a hospital. This enrages Orion, and he calls the guy a jerk for not being considerate to an injured person. I’m with you on this one, Orion! 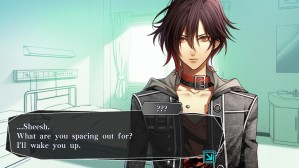 The guy notices her spacing out as the heroine listens to Orion’s complaints, and says he’s going to wake her up. 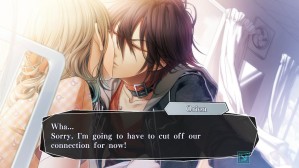 He does so by… suddenly kissing her! This is too much for little Orion to bear, so he cuts off all connection to the heroine as this happens. 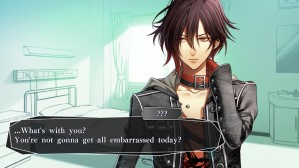 Then it’s revealed that he kissed the heroine to tease her, to which Orion pops up again to yell at him even though he can’t be heard. Thanks for trying, Orion. The guy does express concern when the heroine doesn’t respond to his kiss or anything he’s said, so he’s already suspicious that there’s something going on. 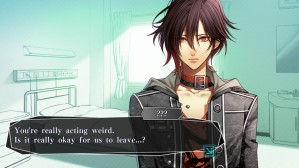 Once he comes back, we learn some information on the heroine’s traits: she’s a bit of a neat freak. She cleaned up the room she was staying in the day before even though she was injured. Perhaps she was nervous about the circumstances of what led to her injures and couldn’t sit still? There’s still much that’s not known, but soon all will be revealed!

Of course, as soon as there’s any sort of optimism on gaining a bit of info, they get a big problem thrown their way: they now have to fib their way to be able to get to the heroine’s residence. Orion panics, but suggests to say that they’re not that great with directions. It worked, and the guy was able to direct the taxi driver to the right direction. Phew! 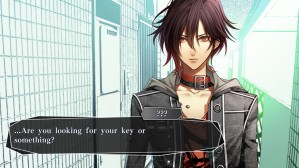 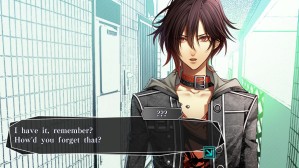 They managed to get to her place of residence safely, but they also gave her boyfriend more reason to be suspicious of what’s going on, by going ahead of them and passing her apartment door along with not knowing that he had her key. He seems to be pretty sharp, so if more mistakes are made, it seems like he’ll figure out that the heroine has amnesia!

While he cleans up the place, the heroine’s boyfriend requests her to get some time and suggests this as a rehabilitation activity. Orion complains that he’s too strict, but I agree with the boyfriend on this one: recovery time will be easier if she slowly re-acclimates to what they used to normally do rather than resting all the time. Besides, if anything goes wrong, he’ll be there to help, so it’s not a big deal. 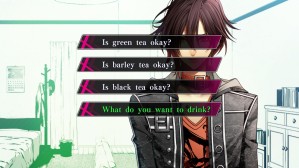 The real issue here is…what kind of drink does this guy even like? We’re given a selection to choose from, but it seems safer to just ask him what he prefers, right? 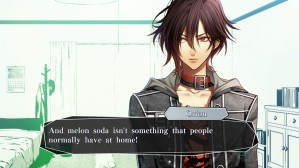 He requests…melon soda, which isn’t even a kind of tea. Nice! Orion expresses his frustration at him once more, but it just seems like the guy is trying to…test the heroine’s memories with these requests. Perhaps he already knows she has amnesia? They spent the rest of the day trying not to seem more suspicious, which was a huge chore.

Evening is finally here, and the boyfriend announces his exit. Orion is beyond relieved that they’ll finally have some breathing room. The guy announces that he’ll be over as a guest early tomorrow morning, and warned the heroine to not sleep in too much, so they can keep up with their at-home rehabilitation activities. After he leaves, the heroine and Orion aren’t able to do much due to being exhausted and still in pain from the injuries, so they quickly fall asleep. 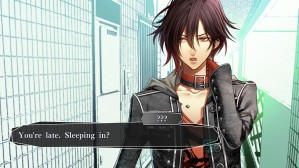 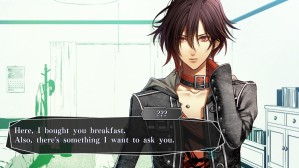 Morning comes, and the heroine’s boyfriend is already waiting outside! He wasn’t kidding when he warned against sleeping in. And so begins an early start to the day while trying to figure out more information about the heroine and the people she might possibly know…not to mention more information on her boyfriend. He starts off with a questions…what could it be?

Apparently it’s their one year anniversary?! What a day to have memories missing!

The questions don’t stop there, though… 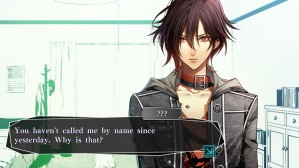 And here is the worst possible question to be asked to someone who lost their memories. Seems like he often teases the heroine, but they’re pretty close, and when she wasn’t acting that way anymore, he immediately suspected there was something wrong with her memories. 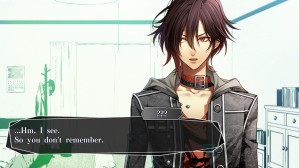 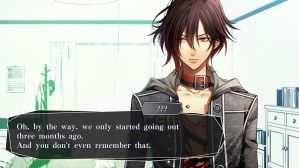 Since she can’t find a way to remember his name, he also mentions that the one year anniversary was a lie; they’ve only been going out for three months. It was a sneaky way to test the heroine’s memory, which really frustrated Orion.

The boyfriend now knows the truth that she doesn’t remember anything, which was something they wanted to completely avoid. When asked why she didn’t say anything about it and why she pretended that everything was they’ve always been, the request to not go back to the hospital is made, which he respects and complies with. He also will aid the heroine in gaining her memories back without trying to make too much fuss about it to everyone else that they both know, which is convenient! 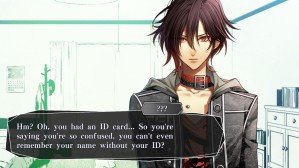 When trying to test what she knows, it’s shown that she’s still not even sure about her own name…there’s a lot of work to be done to gain these memories back. 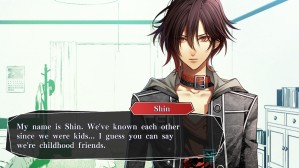 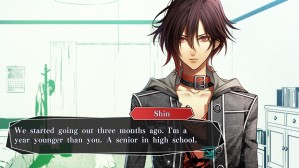 At last the boyfriend’s name is revealed: his name is Shin, and they’ve been together for quite a long time. Even though he seems pretty mature, he’s a year younger than the heroine and still in high school. Shin seems like a reliable guy that deeply cares for the heroine even though he teases her a lot. He will be your guide in getting your memories back! But there’s also another pressing question: just what happened a few days before that got the heroine injured? Along with her memories, she must now find out the truth of what happened on those days. How will this story end? That is completely up to you, the player!

Amnesia: Memories will be released on Steam and on the Playstation Network this Tuesday, August 25th! Remember that you can opt to get either the Limited Edition set with the Steam code or just the Keepsake Box without the Steam code over on Idea Factory International’s webshop! Unfortunately, there’s no set with the Vita version code; your option at that point is to get the Keepsake Box and buy the code separately. If you’d rather play the game on your mobile devices, Gloczus will be releasing a mobile version soon! Please note that this is Idea Factory International’s first foray into determining the otome game demand over here, so be sure to provide them with plenty of feedback so they can get a gauge of what fans want to see more of in the future!

Orion’s expression here is just too much for me to handle! 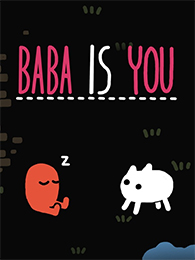 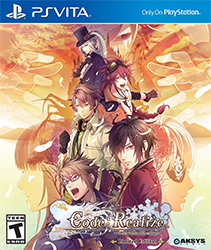 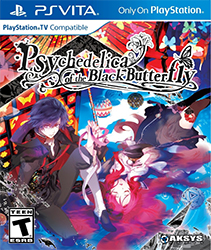 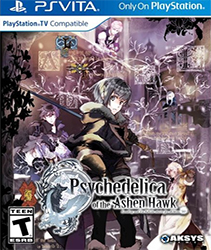